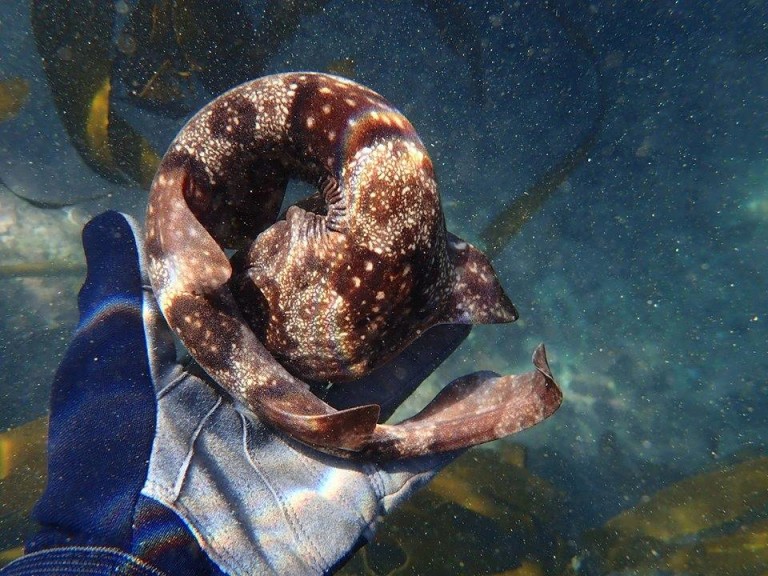 Gansbaai is the great white shark capital of the world but in the excitement over these charismatic apex predators it is easy to forget about the smaller shark species along our coastline.

Our volunteer team regularly tags and releases these creatures as part of our research inititiave so we have had the pleasure of getting to know and understand some of them better, as well as appreciate their unique qualities and quirks.

Arguably the most endearing of these are the shy sharks – named for their habit of curling up into a ‘doughnut’ when they feel threatened. In South Africa we have two shyshark species – the dark shyshark (photograph above) and the puffadder shyshark, both of which grow to around 60cm in size. Dark shysharks tend to hang out in kelp forests or around rocky reefs. They range in colour from light brown to nearly black, with brown to black ‘saddles’ and/or white spots. The head is wide and flattish, with a rounded snout. Dark shysharks lay two egg cases at a time, which hatch after 6 to 10 months.

The puffadder shyshark can usually be found on rocky reefs or in sandy habitats. It has striking patterns, made up of a series of dark-edged, bright orange ‘saddles’ and numerous small white spots on the back, which look similar to those of a highly toxic South African snake, the puffadder. This species lays one to two eggs at a time, with a gestation period of 3 months.

One of the funkier looking sharks along our coastline is the leopard catshark, which grows to around 85cm. It is most active at night and can be found in kelp beds, sandy bays and around rocky reefs. This unique shark is covered with diverse patterns of black spots, blotches and rosettes against a pale grey/white background, however, its patterns morph with age. The leopard catshark lays two eggs at a time, each protected by a rectangular capsule, which is light brown to olive in color. Eggs hatch after 5.5 months. 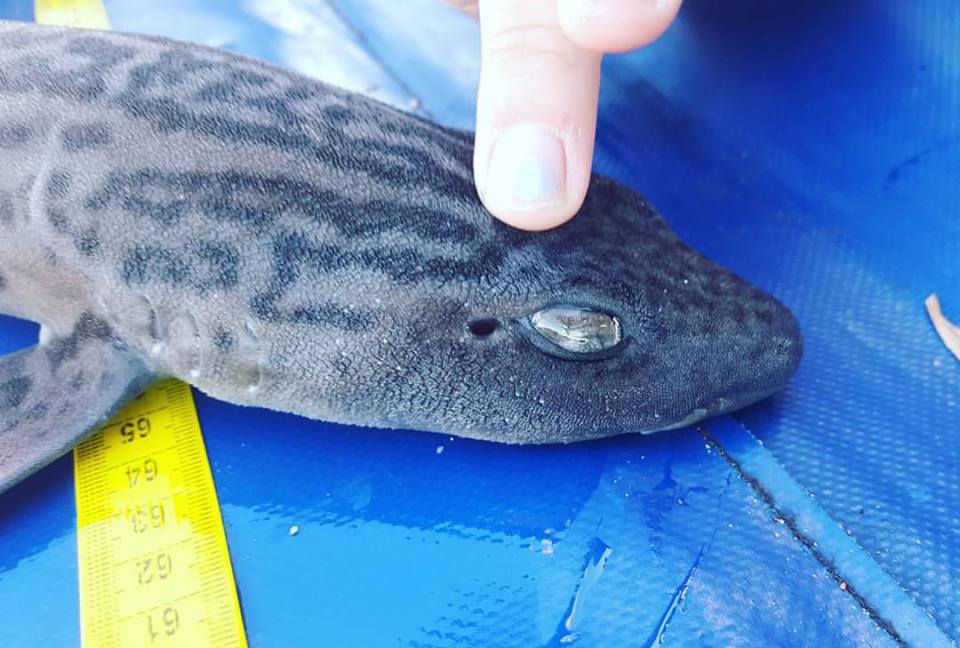 The Pyjama Shark frequents rocky reefs and kelp forests and grows to around 1.1m long. It has dark stripes running vertically down a stout, light grey body, with slender barbells and two dorsal fins placed far back on the body. Like the leopard catshark, it lays two eggs at a time, which hatch after 5.5 months, with hatchlings measuring 14-15cm in length. 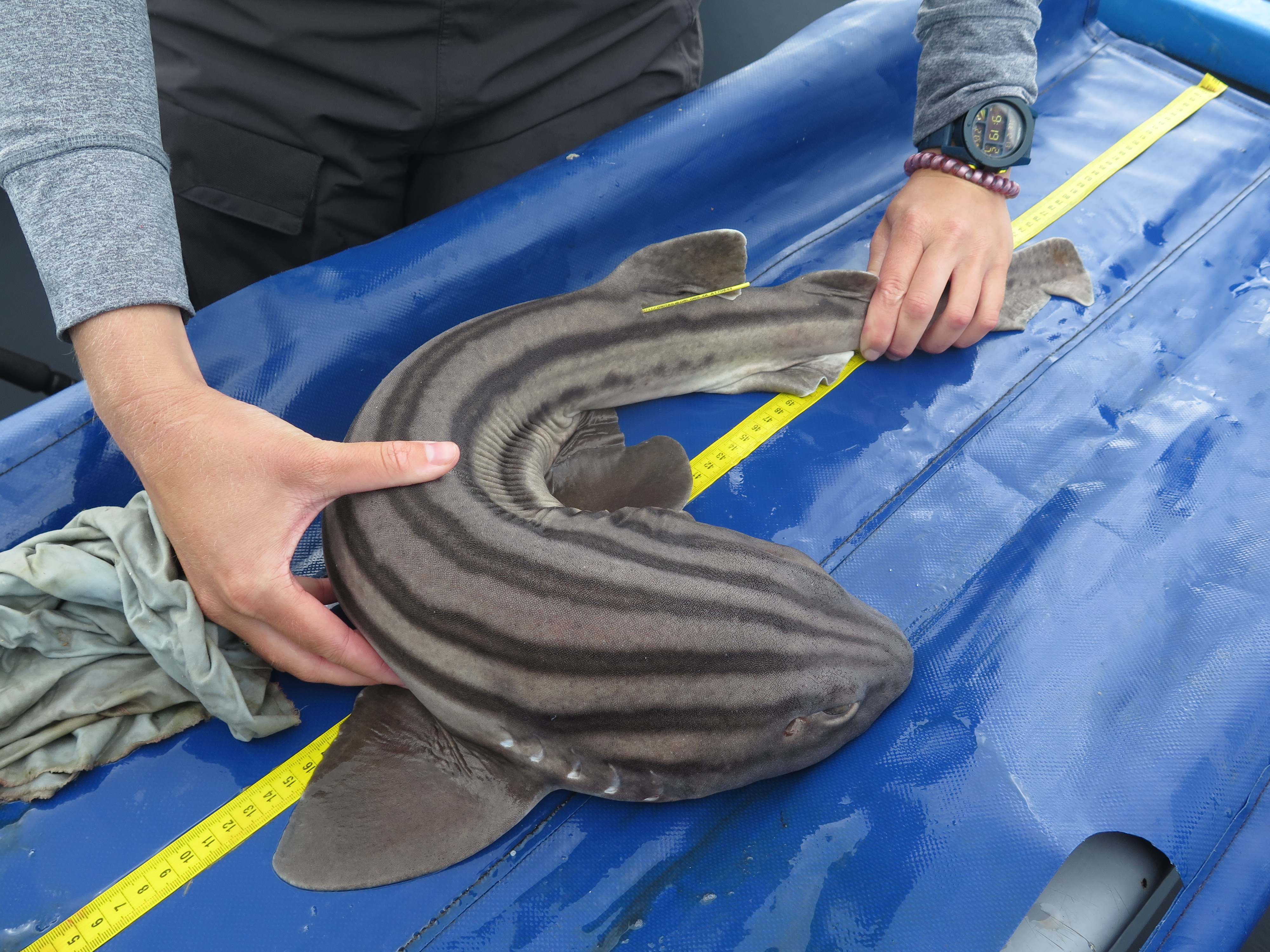 The tiger shark is found in similar habitats to the puffadder shyshark. It typically has roughly ten dark brown ‘saddle markings’ on a yellowish brown background and a broad, flat head. Females retain eggs internally until embryos are at an advanced state of development, so they have a short hatching time after laying (1-2 months). Between 12 and 22 encapsulated eggs are produced at a time and secured to the sea floor.

All these sharks are from the Scyliorhinidae family – but that is not where the Great White’s relatives stop… Stay tuned for more info on the greater elasmobranch* family next month!

*Elasmobranch – a subclass of cartilaginous fish that includes sharks, rays and skates. 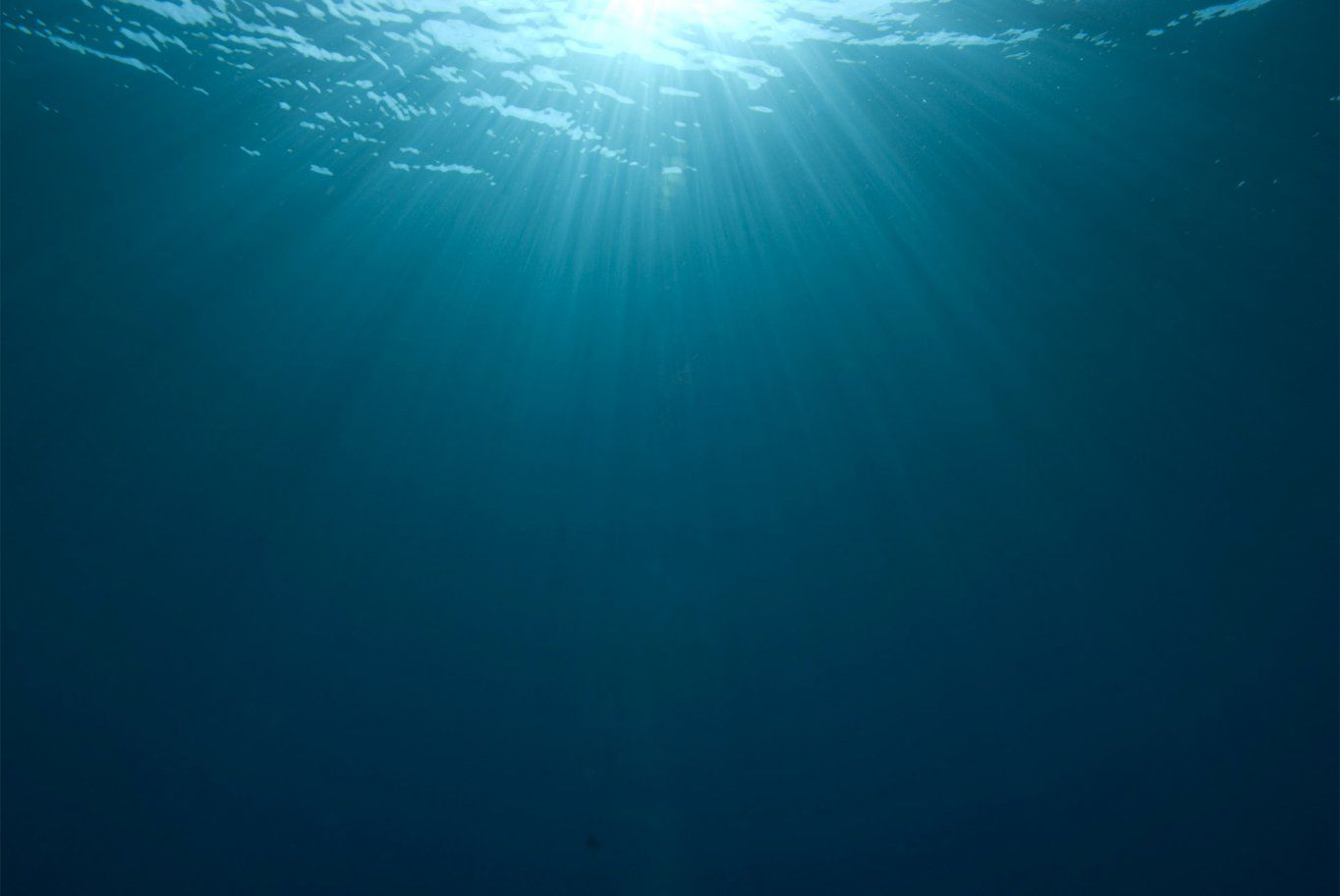